In this online event via Zoom, the students showcased their talents in singing, dancing and public speaking. The Junior Nursery class gave a lively and energetic performance as they danced to three beloved Tagalog children’s songs: Ako Ay May Lobo, Tatlong Bibe, and Leron Leron Sinta.

Check out one of their exciting videos during their practice and Mason’s performance during the culminating activity!

The Senior Nursery and Kinder kids, on the other hand, gave their own wonderful rendition of the poem, Batang Munti. Although a lot of them are not used to saying some of the Tagalog words, after more than a week of practice, they not only could say it, but they also memorized the entire poem!

Aside from their group piece, the SNK kids also prepared their own individual poems about themselves. Let’s take a look at the poems of our friends AJ, Lincoln and Gianna! 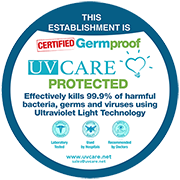 Cambridge is a partner of UV CARE in keeping germs away